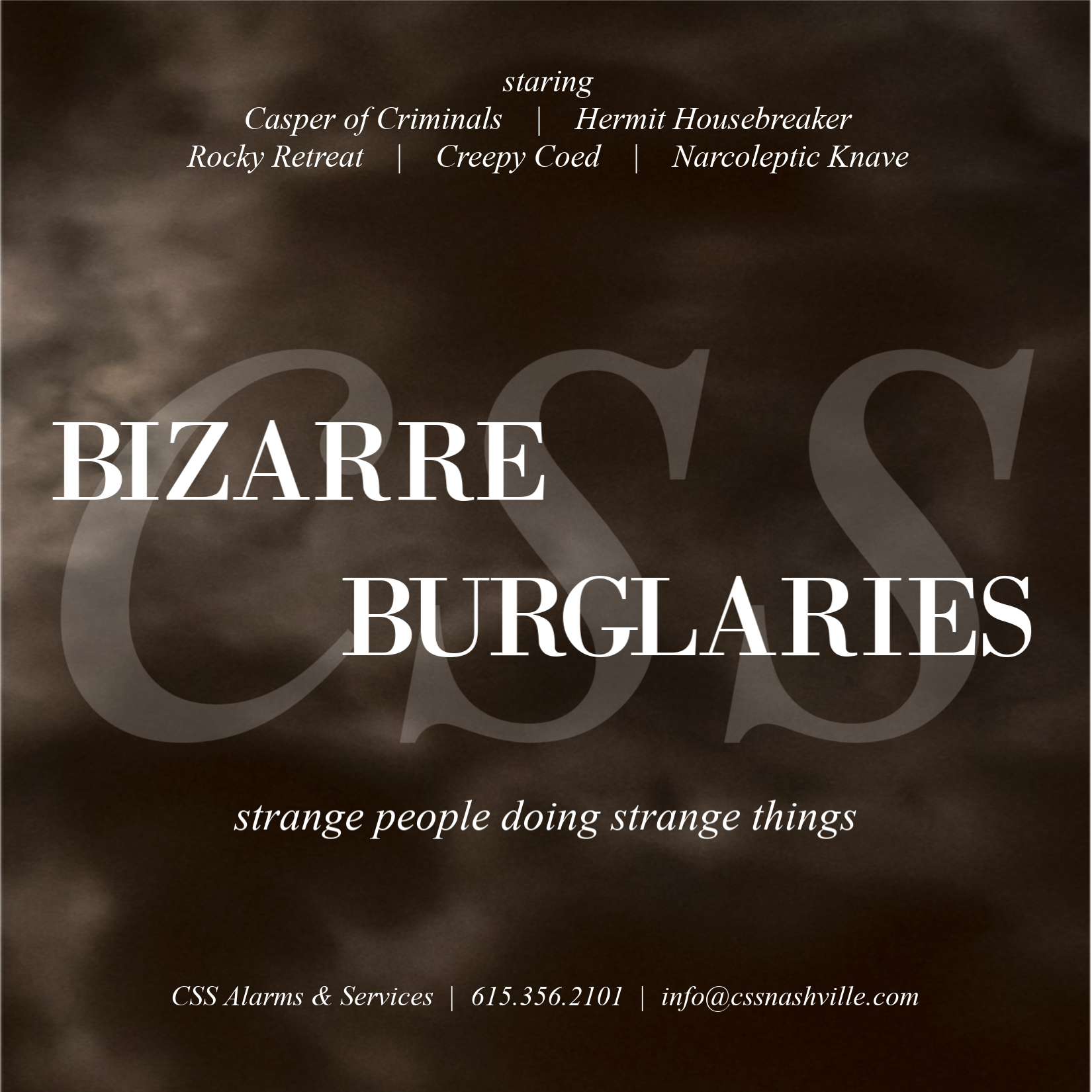 During the month that celebrates ghost stories and make believe, the following bizarre burglaries are a reminder that; truth is often stranger than fiction.  And sometimes factual news can read more like satire.

The Casper of Criminals

In Hamden, Ohio, deputies from the Vinton County Sheriff’s Office spoke with a resident who reported that a woman had broken into her home and acted very peculiar. The victim stated that the intruder entered through the back door, sat down on the couch and began to pet the family dog. Then, she washed the dishes and left the house. This unrequested act of domestication, led to the friendly criminals arrest on charges of burglary.

Had this homeowner been a CSS Alarms & Services Cameras for Life client, she would have camera footage to present in court, documenting these helpful, but criminal actions.

Ever wonder who holds the record for most burglaries committed? This distinction most likely belongs to Christopher Knight. For over 27 years, he lived in a crude camp in the woods of Maine. During this time, he lived without any human contact and survived by committing approximately 1,000 burglaries against homes in the area. He entered the woods with almost no possessions in 1986; and by the time of his capture in 2013, his camp was composed entirely of items stolen from nearby residences. The thefts were mostly comprised of smaller essentials such as food, clothes, books, and batteries out of flashlights. With his capture, we can be sure that more than a few of the area’s residents were able to reconcile lots of disappearing item mysteries.

And just a reminder, if you have an alarm system currently communicating via a landline phone, experienced burglars such as Mr. Knight will know how to bypass the communication to the central station. For this reason, it is recommended that alarms communicate via cellular technology.  CSS Alarms & Services, can easily help you make that change.

Armed robbers entered a home in Marbella, Spain, where the tied up the woman living there and terrorized her into handing over cash and jewelry at knife point. However, they cut their raid short after spotting a family photo in one of the bedrooms. The photo pictured ‘tough guy’ actor Dolph Lunddgren with his children. The masked raiders, upon realizing who the house belonged to, fled the scene immediately.  Lundgren is most famous for playing Russian boxer Ivan Drago in Rocky IV. And luckily for the assailants, was not at home during the incident.

CSS client’s first line of defense against home invasions is yard and mailbox signs and decals on windows. These clearly indicate the presence of an alarm system. And after hearing this story, framed photos of Chuck Norris wouldn’t hurt!

Waking Up to a Nightmare

A woman in Nashville, TN was awoken by hearing the screaming of someone who was inside her house. She discovered a bloodied man pacing her living room while screaming at the top of his lungs.  Fearful, she quickly FaceTimed her mother, grabbed her young son from his bed and went in the bathroom while locking the adjoining bedroom door. After realizing she had left her cell phone outside the room, her mother on FaceTime was able to contacted the police. The burglar turned out to be a local university student who had broken through a window to get inside the home.

In cases such as these, a home alarm system has capabilities that enable you to notify authorities quickly.  A key fob with a panic button can be kept on your nightstand or you can use the panic buttons on your alarm keypad.

How Do They Sleep at Night?

Apparently, pretty deeply.  At least that was the case for a home burglar in Florida who decided to take a break in the middle of committing his crime. The robber feel asleep on a bed and was discovered by the housekeeper. He was sleeping so soundly that he didn’t even hear the police snapping his photo for evidence.

With CSS Alarms & Services interactive monitoring, you too, can rest just as easily as this thieving sleeping beauty. From an app on your phone, you can control and check the status of your home security from anywhere.

See everything that we can do.